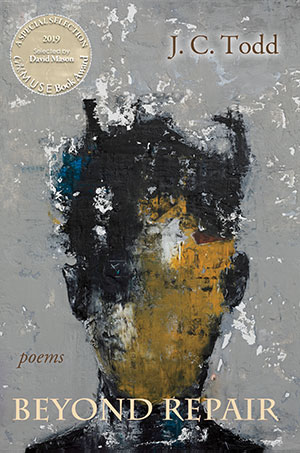 J. C. Todd’s Beyond Repair bears vivid witness to the struggles for healing—both small- and large-scale—in global hotspots of conflict such as Hama, Syria, and vicinities, where a tenacious Air Force doctor was stationed. With precisely crafted poems, imbued with empathy and grace, Todd examines those who must continue with dailiness amidst horror and chaos, on and near the many “playing fields and killing / floors . . . / where some will say nothing / is left, not even names." Both the best and the worst of human nature are laid bare in a “FUBAR’d” war-zone “tour of racket / and ruin." This fierce and moving collection is a special honoree for the 2019 Able Muse Book Award.

PRAISE FOR BEYOND REPAIR

J. C. Todd’s Beyond Repair is woven of war and aftermath. Survival lives in the blood-wit of each turn in this wrought collection, singing and daring the heart awake. This voice is refined to an edge, each word weighed before given grace to live on the page. Todd’s collection possesses fortitude and reflection. The speaker grows whole through the act of witnessing. Leaps and associations feel calibrated as the reader finds oneself sizing up the angle of heart and head, becoming part of the accumulative turns—an accord of people, voices, places, times—and we confront what war does to one who has a capacity for grace.
—Yusef Komunyakaa, Pulitzer Prize winner; author of Everyday Mojo Songs of Earth

Bearing unflinching witness to upheaval across borders and time, places where “nothing / is left, not even names,” Todd’s poems give voice to the oppressed and missing, asking “Without a speaker language what is it.” Compassionate, questioning, she remains keenly aware of the challenges of representation, acknowledging how “beyond the cropped shot” the “background resists / insists.” Here, an expectant mother learns of Hama’s destruction, her baby “safe in the province / of [her] body.” A riveting crown of sonnets chronicles a military doctor’s grim struggles to heal during her “tour of racket / and ruin.” In Damascus’s suburbs, parents “caution, Try / not to die today.” J. C. Todd’s unforgettable voices and visions will leave you transformed forever.
—Dilruba Ahmed, Bakeless Award winner; author of Bring Now the Angels

In these powerful, impassioned poems of war’s devastation, what counts is neither party nor nation, but only bodies and minds caught in modern warfare’s mutilating gears. Eloquent in witness, with searing exactitude, J. C. Todd restores life’s meaning—always war’s first casualty. Filling the acronym PTS with substance—“memory a carnivore ravening the entrails / of castaway reason”—she takes us inside those who’ve served, the poet as faithfully vigilant as the Air Force doctor charged with care, even of those damaged “beyond repair.”
—Eleanor Wilner, Frost medalist; author of Before Our Eyes

J. C. Todd is the author of four previous collections of poetry, most recently The Damages of Morning, a 2019 Eric Hoffer Award finalist. Winner of the Rita Dove Prize in Poetry and twice a finalist for Poetry Society of America awards, she has received fellowships from the Pew Center for Arts & Heritage, Pennsylvania Council on the Arts, and artist residency programs including the Bemis Center. Her poems have appeared widely in journals such as the American Poetry Review, Beloit Poetry Journal, Mezzo Cammin, the Paris Review, and the Virginia Quarterly Review. She lives in Philadelphia.